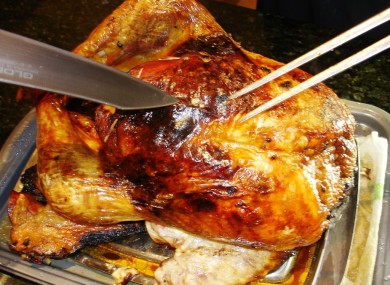 A CAVAN FAMILY has described how “the place went absolutely mad” when they found out on Christmas Day that they won a €4.5 million Lotto jackpot. The family collected their winnings today following the Christmas Eve draw and described how they checked their ticket after hearing the local Baileborough Super Valu had sold the winning ticket. The father of the family said he was in the car with his son when they heard the town’s good news and then realised that the ticket was in the car with them.

“I gave it to him and he quickly scanned the ticket on his phone. A message came up to tell us to contact the National Lottery so we still didn’t know if we were the winners,” the new millionaire said today. We got home just before the Christmas dinner and I got my son to get the winning Lotto numbers on his computer. He called them out to me, one by one and before he even finished, we knew we had hit the jackpot, the place went absolutely mad.

The family is not going nationwide with their win but the father says their close family and friends have been a great help since. “We live in a very small close-knit community and our neighbours and friends have been incredible over the past few weeks with good wishes and messages of support,” he says. We are planning a big party for our neighbours in the next few weeks when the excitement dies down. We would be a very level-headed family so there is no chance we will get carried away too much by the win.

“I was actually back to work on St. Stephen’s Day,” he added.